Sniffing the traffic on the loopback interface on Windows with RawCap

If you ever had to write a chunk of code for inter-process communication via Internet Protocol (IP) you must have came across using the loopback interface. IPv4 address 127.0.0.1 is usually the address of this virtual interface and also the address that hostname localhost  resolves to. You would, at least for tests, set one process (server) listening on some port on the localhost while the other process (client) would connect to the server and start their data exchange.
In order to check the data sent from one end to another, we can use any kind of process output (standard output, log, ...) provided that given process actually shows that data. But what if there is no such output? We have to find a way how to sniff the traffic between these two parties.
RawCap is one of free tools capable of sniffing packets on the loopback interface. It collects packets and stores them in the file in pcap format. This file can be opened in Wireshark.
In order to demonstrate RawCap packet capturing we can use ready-made networking application which can serve both as a server and a client - Ncat. It comes as a part of Nmap for Windows and uses TCP by default.
Once Nmap is installed, open console window in C:\Program Files (x86)\Nmap directory and  type the following:


-v (or --verbose) sets verbose output
-4 instructs ncat to use IPv4 addresses only
-l (or --listen) switch makes Ncat to listen for incoming connections on the provided hostname and port. localhost will be resolved to 127.0.0.1 and I also used an arbitrary port which was free - 6789.

We effectively have server running now but before we run the client it is necessary to start capturing packets. From the directory with RawCap.exe we have to open terminal window with Administrator's privileges and run RawCap.exe (which has to be run as Administrator). Now we just have to follow the instructions. RawCap lists network interfaces and asks which interface shall be monitored. We have to type in the number next to the loopback interface. In the next step we can set the name of the packet dump file or just leave default name which is dumpfile.pcap. At this point we have started sniffing packets on the localhost!


Let's now start the client. We have to open another terminal window in Nmap's directory and run another instance of Ncat which will try to establish TCP connection with the localhost:6789 endpoint:


Both server and client show the state of their current connections:

So far, only TCP handshake has taken place in the communication between these two instances of Ncat. We can expect that RawCap has captured at least these 3 packets so far (SYN, SYN-ACK, ACK). Let's now send some user data. By default Ncat works as an echo server which means that it echoes any text message it receives. If we type in the client "hello from client", that string will appear on the server's output. The same happens if we go the other way round and send message from the server to the client. Once we want to stop communication, we can use CTRL-C combination to stop one process. The other will get disconnected and also terminate. We can use the same combination in order to stop RawCap.exe.

At the end of the session we have: 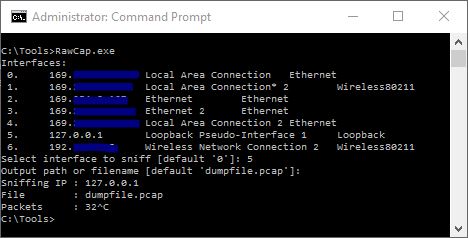 RawCap.exe saved all captured packets in file dumpfile.pcap. If we open this file in Wireshark and filter out all packets with TCP port 6789 we can see packets exchanged between our Ncat processes:

If we follow that TCP stream we can see exact text messages sent between client and server:

How to use internal type as a unit test argument

Behavioral tests sometimes require access to types which are internal for the SUT assembly. If those types are used in test methods, test assembly name has to be specified through InternalsVisibleToAttribute in SUT assembly. For example, if MyAppTests is a library containing tests for classes within MyApp we have to do the following:

This makes internal types visible within unit tests. But if we want to pass such types as arguments to unit tests (via TestCase or TestCaseSource attributes), compiler will complain about inconsistent accessibility.

For example, if we have public class (SUT) and internal enum:


and the following test:

Unit test methods have to be public, otherwise unit test runners will not be able to see them or would report that test fails (Nunit Test Adapter also issues error message: "Method is not public"). Unit tests are public API so types of their arguments also have to be public (visible in any assembly, not just in test library).

The solution for this is to pass arguments to test method as type object and then cast them back to the original internal type:


In this particular case, when internal type is enum, we could gave passed type int instead of object but for any other custom internal type, object is the only solution.